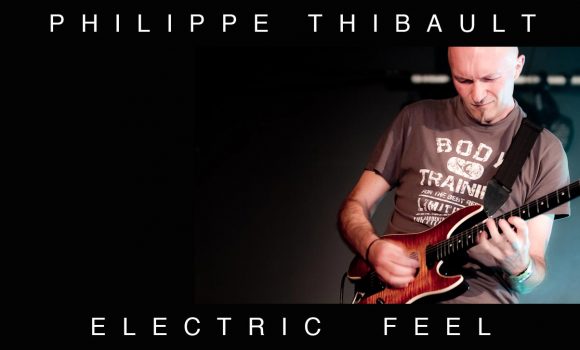 “Philippe Thibaut is a guitarist from Belgium who has released his fourth CD, entitled Eventful World. The album contains nine instrumental tracks using the « Thibaut meets with Satriani » blueprints. Eventful World features Thibaut’s dexterous musicality and includes the contributions of drummer Marc Weymaere and bassist Benoit Vanderstraeten on a couple of tracks. Speed and virtuosity are significant elements in Thibaut’s guitar style, and he adds his own sonic signature to the mix. Philippe Thibaut makes a statement here: it’s OK to play your instrument really well and to play music that is challenging and riveting. This one stacks up to repeated play”    DanMcAvinchey – http://www.guitar9.com/eventfulworld.html

“Belgian guitarist Philippe Thibaut returns with his third album, Guitar Planet, this time recorded under the project name Theebo. The CD features twelve rock and hard rock instrumentals and three vocal cuts (a cover of Jimi Hendrix’ « Crosstown Traffic », and two originals). Guitar Planet also features blazing instrumental covers of Hendrix’ « Purple Haze » and Extreme’s « Cupid’s Dead ». Thibaut is at the top of his game here, incredible wah-wah workouts give way to terrific single note bursts, while heavy riffage is augmented by harmonized lines – even his ‘underwater’ guitar sound (heard on his CD « Outside Limit ») makes another appearance. Thibaut fans will delight in this new collection of tunes, while those yet unfamiliar with his guitar work will need to pay attention.”  Dan McAvinchey – Guitar Nine Records

“Philippe Thibaut has done it again with his second release, Outside Limit, a CD filled with ten original rock and hard rock instrumentals that bristle with guitar-driven fury. The Belgian guitarist slips and slides all over steaming, high-energy numbers such as « Inside The Hurricane » and « Underwater Meeting » (featuring ‘underwater’ guitar in the chorus), letting the fluid melodies carry the tune until it’s time to blaze. Thibaut has made great strides in the engineering and production areas as well–the tracks are hot and clean throughout. Outside Limit is a riveting instrumental collection–you’ll be hitting the repeat button on your CD player a lot with this one.”  Dan McAvinchey – Guitar Nine Records

“Free Play is the 1997 release from Belgian guitarist Philippe Thibaut–an instrumental rock guitar tour-de-force featuring eight original compositions and two cover tunes, « Sisters » (Steve Vai) and « Cabin Fever » (Steve Morse). Thibaut can really play his instrument, or in this case, instruments, as he handled bass and drum programming duties on all tracks. Highlights include « Birth Of Nature », « Time Out » and « Odyssey »–three cuts that exemplify his approach to writing songs, and which include just the right amount of guitar pyrotechnics to satisfy six-string junkies everywhere. Free Play is the perfect introduction to the European brand of instrumental rock”. Dan McAvinchey – Guitar Nine Records

“Dear Philippe, I received your letter and CD and I am very impressed. Your versise of Sisters is beautiful. I rarely hear such inspired players. I wish you the very best. Many regards.”   Steve Vai – letter